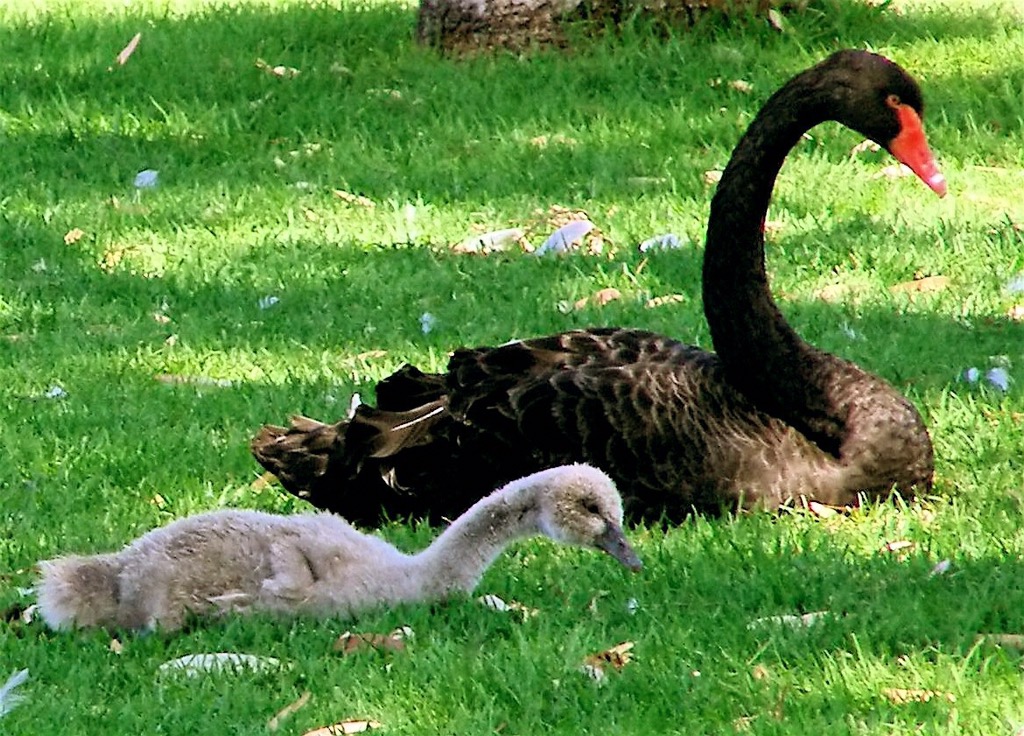 A few interesting facts about swans (from Wikipedia)
The English word ‘swan’, akin to the German Schwan, Dutch zwaan and Swedish svan, is derived from Indo-European root *swen (to sound, to sing)
The Northern Hemisphere species of swan have pure white plumage but the Southern Hemisphere species are mixed black and white. The Australian black swan (Cygnus atratus) is completely black except for the white flight feathers on its wings; the chicks of black swans are light grey. The South American black-necked swan has a white body with a black neck
Swans usually mate for life, though “divorce” does sometimes occur, particularly following nesting failure, and if a mate dies, the remaining swan will take up with another.

Swans are often a symbol of love or fidelity because of their long-lasting, apparently monogamous relationships
Although swans only reach sexual maturity between 4 and 7 years of age, they can form socially monogamous pair bonds from as early as 20 months that last for many years, and in some cases these can last for life. The lifespan of the mute swan is often over 10 years, and sometimes over 20, whereas the black-necked swan survives for less than a decade in captivity. These bonds are maintained year round, even in gregarious and migratory species like the tundra swan, which congregate in large flocks in the wintering grounds.
Several species are migratory, either wholly or partly so. The mute swan is a partial migrant, being resident over areas of Western Europe but wholly migratory in Eastern Europe and Asia. The whooper swan and tundra swan are wholly migratory, and the trumpeter swans are almost entirely migratory.

Swans are known to aggressively protect their nests.

Swans are revered in Hinduism, and are compared to saintly persons whose chief characteristic is to be in the world without getting attached to it, just as a swan’s feather does not get wet although it is in water. The Sanskrit word for swan is hamsa and the “Raja Hamsam” or the Royal Swan is the vehicle of Goddess Saraswati which symbolises the “Sattva Guna” or purity par excellence. The swan if offered a mixture of milk and water, is said to be able to drink the milk alone. Therefore, Goddess Saraswati the goddess of knowledge is seen riding the swan because the swan thus symbolizes “Viveka” i.e. prudence and discrimination between the good and the bad or between the eternal and the transient.
This is taken as a great quality, as shown by this Sanskrit verse:
Hamsah shwetah, bakah shwetah, kah bhedah hamsa bakayo?

With the milk-water test, the swan is proven swan, the crane is proven crane!
It is mentioned several times in the Vedic literature, and persons who have attained great spiritual capabilities are sometimes called Paramahamsa (“Supreme Swan”) on account of their spiritual grace and ability to travel between various spiritual worlds. In the Vedas, swans are said to reside in the summer on Lake Manasarovar and migrate to Indian lakes for the winter. They’re believed to possess some powers such as the ability to eat pearls.

As an animal totem, the black swan a powerful and elegant totem to have. Most people see the beauty in the swan first, they see how amazing and astonishing it is.  The black swan is revered as sacred by the elders as well. Not only is it so, so beautiful but it is powerful, it is strong and it will fight to defend that which it loves with all of its strength. The swan will attack anything that comes near its loved ones.  A swan will attack a bear that gets too close to its young, and will pull the fur off of a fox that comes to close to its mate..

To have the black swan as a totem is something to be very proud of, hold your head up high knowing that you are capable of such love and protection over those that you do love.. you are powerful in that love, you are graceful and people easily love you.. find your strength to protect what you love, to stand up for that which is right and honorable.  The black swan will never speak just to be listened to or to hear them self speak.. but usually is quiet.. but when the swan does talk.. everyone listens.. there is wisdom in your knowing and in your power..the swan’s power and strength is not like a fighter but like the quiet warrior, the wise one that strikes when it is necessary and loves everyone.. I see greatness in you my friend.. stay true to your heart and always let your heart and soul lead the way.. not the mind..Your energy color is the color of deep wisdom and knowing.. ancient true, knowing